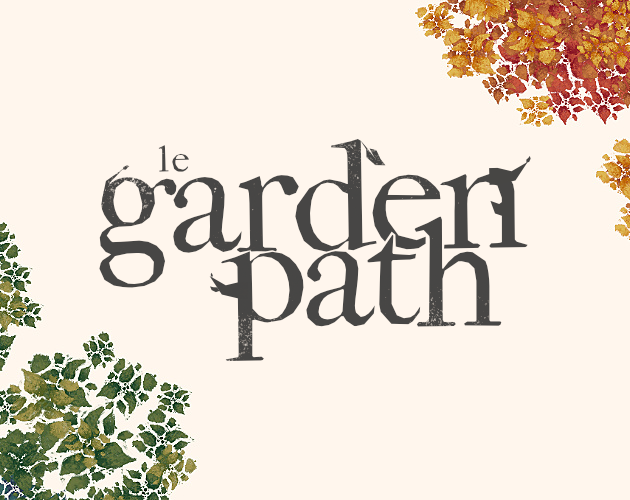 After much deliberation, and it grating the back of my mind, I'm actually really excited to share that 'The Garden Path' will be renamed 'Le Garden Path'.

I thought I'd take some time to explain my thought process behind the decision. Firstly, this is not because I am French. I am not French, despite my French sounding name. French is a beautiful language, and one that I wish I could speak fluently. Indeed, I could really have chosen any translation of the word 'the' – the language itself is not what is important. More and more so in today's age, we live in an international community and languages do not matter. I'd like to think I could use any language and it would be equally as embraced.

Also, if it truly was because of the French language, I would have renamed the title entirely to 'Le chemin du jardin', but I have not done so. As I am not French, I do not want to pose as though I was French.

And it goes without saying that some could see this move as an cynical attempt to glamourise the title, to give it some kind of higher status or class that it already has. While adding 'Le' to the beginning of everything does give it an air of poetry and whimsy – and, surely, these made the decision that much easier – it is not the reason I have settled on the new name.

No, the reason I have decided to change the name of the game is because my name is Louis. 'Le' and 'Louis' both begin with the letter 'L', and alliteration is a beautiful and powerful thing. It just rolls off the tongue so much better when I say it all at once, which I often do. It pained me each day that I did not decide, from day one, to begin the title with the letter L, and I have finally found a novel and neat way to do just that.

Also, my name has every vowell in it except E, and 'Le' has the letter E in it. Y, of course, is not a real vowell.

Name changes are no small feat, as I'm sure you all appreciate. In this time, I can't help but remember when 'Google' changed their name from 'Yahoo!', and where I was at the time, and how it made me feel. It goes through everyone's minds – 'It won't be the same'. And yet, here we are. Google even has email now. It also has maps.

I'll be spending some time today updating the name throughout the internet, so it may take some time before you see the full change.

I hope you'll join me on this exciting journey, and continue to follow the development of 'Le Garden Path'.